Tracking Santa Claus from the North Pole on Christmas Eve by radar is an example of a tradition that had its origins in the early boomer years and which continues today. Radar had been used, in rudimentary forms, as far back as the late 1930s. World War II advanced the use and technology. It was during the war that radar operators noticed that weather patterns gave them a noise reading; through experimentation, a Doppler Radar system was developed that could be used by the National Weather Service in the early 1960s. But that is getting ahead of our story.

The Cold War was in full swing in the 1950s and radar technology stood at the front lines of our defense systems. When your opponent could launch a missile attack at any time, the more advanced your radar system was, the earlier warning you’d have to mount a counter-offensive. So went the conversation in the schoolyard.

What we had were two seemingly-divergent radar paths — civilian and military use — that met one day in December of 1955. The story begins in Colorado Springs, Colorado. A Sears Roebuck store ran an ad in the local newspaper that gave children a “Santa hotline” number to call on Christmas Eve. Instead of reaching Santa, the mistyped number connected callers to the Continental Air Defense Command (CONAD). After receiving a few calls, Colonel Harry Shoup began telling children that even though they had the wrong number, they could rest assured that Santa was on his way because he was spotted on radar leaving the North Pole. The tradition began from then on. In 1958, Canada and the United States jointly created the North American Air Defense Command (NORAD), which took over the duties of tracking Santa’s trek on Christmas Eve each year and reporting to TV stations. They would then air the report during the weather forecast.

For Mister Boomer, seeing the radar tracking of Santa Claus each year on the evening news seemed as commonplace as Cheerios and corn flakes in the morning. Of course NORAD could track Santa. Every schoolboy knew they were our military defense system.

The presentation of this “fact,” though, did leave much to be desired. Mister B recalls the station his parents watched most often showing a visual that was supposed to be Santa on his sleigh, being pulled by reindeer, flying overhead on the radar screen. The program, broadcast in black and white, was received on the family’s Sylvania TV and displayed on the tube in dull shades of gray that echoed the Midwestern December sky. For a full fifteen seconds, there it was: a lightbox with a cut-out of Santa’s sleigh and reindeer casting a hazy shadow on the “radar” screen. The now-familiar sweeping radar arm turned clockwise around the screen, illuminating a white, circular light when it reached the twelve o’clock position. Even for a six year old, the presentation had the feel of a project a dad might make in his garage.

Another channel’s presentation was even worse: they didn’t even bother to project an image. Instead, they literally stuck a white silhouette directly on their “radar” screen. Santa’s position didn’t move. Santa couldn’t move. Yet these and countless other TV stations reassured boomer children that Santa was on his way, with lots of toys and goodies on his sleigh. 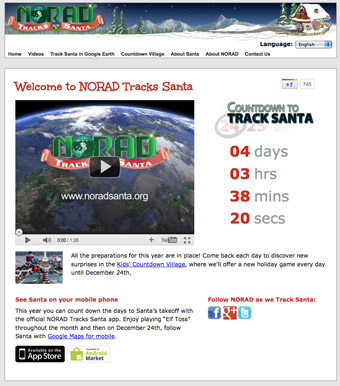 The tradition lives on today with a technology update that lets kids track Santa even on a cell phone!

What memories of tracking Santa by radar can you recall, boomers?

For our parents, Christmas was the best of times. The War was sitting in the rearview mirror, consumer spending was up and the Baby Boom was under way. Suburbia went from an idea to an even bigger idea: the Promised Land of home ownership where children could play and grow, and adults could enjoy an after-work cocktail, barbecue and drive to their hearts’ content. So it seems no mystery at all that our parents would take genuine joy in the boomer-era Christmas season and further the tradition of a visit to Santa to heretofore unseen heights. And most of those visits were to department store Santas.

Department stores had been around for more than a century before baby boomers, of course. Independent stores started to proliferate in greater numbers in the early 1800s as the population of cities grew along with their industries. Yet the story of department store Santas actually began in the late 1800s. Depending on which source you want to believe, the first department store to employ a Santa was either Macy’s in New York City (in 1862) or The Boston Store in Brockton, Massachusetts (1890). The argument goes that James Edgar, of Brockton, should be accepted as the first Santa because he was the first to embody the character we embraced as Santa (jolly, fat, white beard and red suit, as drawn by Thomas Nast for the cover of Harper’s Weekly in 1862). Whereas, states the argument, Macy’s put a guy in a holiday outfit mainly to promote itself. Regardless of where the tradition started, by the 1950s, every department store had its Santa.

With three kids in tow, Mister Boomer’s parents headed out for Christmas shopping forays. There they saw that Sears, Roebuck and Co., Spiegel and even Montgomery Ward (or “Monkey Ward” as we kids called it) each claimed to have the real Santa. Every respectable city had at least one local department store, and many had the national chain stores that started buying up regional stores in the 1950s. Most of us were told, and we believed, that all the different Santas were merely helpers. Santa was a busy guy and couldn’t be expected to be in every store, listening to every kid, went the explanation.

For Mister Boomer and his siblings, the “real” Santa wasn’t at a department store. Rather, he sat in a lavish holiday display sponsored by one of the area’s biggest manufacturers. Each year the company would install two floors of decorated tableaux in their own building, featuring animated figures, rows of trees, trains, lights, decorations and, to Mister B’s delight, even a theater where they’d show a Chip ‘n’ Dale holiday cartoon. He and his siblings enjoyed the annual trek to this holiday wonderland, except for one thing: the visit to Santa. Mister Boomer, like many fellow boomers, felt mixed emotions when visiting Santa in his early years; for many of us, the experience marked the first time we would stand in a long line, either dreading or anticipating the event at hand — and many of us did both. As for Mister Boomer, a born Santa skeptic, being plucked from a line and shoved on the lap of some creepy guy wearing something white on his face that surely didn’t resemble anything close to an actual beard was an ongoing mystery. Why would his parents put him through this ordeal? The guy couldn’t be real, and besides … he never did seem to get the gift list right. From an early age, he felt the whole business just didn’t add up.

Santa resided on the second floor, on an elevated platform against a back wall at least a dozen feet above everything else. The platform was barely eight feet wide — just large enough for Santa’s throne and a couple of elves who stood next to him. The stairway to Santa was on the left of the platform, and the exit was a slide on the right. There was no railing to keep children from tumbling into the display. (That wouldn’t fly in today’s environment!)

A large line of children snaked around rolling mounds of fake snow and oversized candies while girls dressed as elves kept things moving along. Slowly inching forward with the queue along with his brother and sister, the annual drama unfolded before their eyes: little kids screamed when they were plopped on the guy’s lap; some kids squealed with glee while others squealed because they had to go to the bathroom. Then there was the big slide down. The whole scene was very much like the one pictured in A Christmas Story, only higher and bigger.

Mister Boomer liked slides, but hated Santa. He had decided early on that he’d blurt out one thing and get to the slide. The least amount of time he could spend with the scary guy, the better. And so it went, for a few years.

When Mister B was six, his older brother sprang the news that Santa wasn’t real; as proof, he showed Mister B where his parents had hid their gifts. Mister B was neither surprised nor disappointed … an early realist in the matter, his suspicions were confirmed. Now his concern was to maintain the charade as long as his parents seemed to want it, and to keep the truth away from his little sister. Both brothers could see she reveled in the whole pageantry of the season, and agreed to keep her blissfully in the dark — at least for another year.

What memories of visiting Santa come to mind for you, boomers?