For most baby boomers, one wasn’t the loneliest number, it was the only number when it came to several things in their lives, including cars, TVs and ONE dinner time.

Baby You Can Drive My Car — When I’m Home
After the War, even though families were started immediately — creating the Baby Boom (1946-64)– it took a while for families to get their footing financially. Possibly more important than available income was a series of social morés that did not give women equal status with men. So, even though 70% of households owned a car by 1955, it was just one car. And that car was often referred to as the family car.

With the man of the house working while the woman stayed home with the kids, she increasingly became isolated in the suburban paradise imagined after the War. Car manufacturers recognized this and began campaigns on trying to get people to buy a second car. One ad from 1958 spoke directly to this new phenomena in a country now so connected to the automobile with the headline, “Stranded by the One-Car Habit.”

Ford made a big pitch for families to own second cars in the 1950s by echoing the edict put forth by its founder, Henry Ford, back in 1913: that his cars shouldn’t cost more than what the people who built them could afford. So Ford’s commercials tried to put the bug in our moms’ ears that Fords were so affordable a family could have two. But they didn’t stop there. In the 1953-54 model season, Ford sold coats and handbags to match certain cars in an effort to link style to their models.

When the Ford Mustang was introduced in 1964, many saw it as the perfect Baby Boomer car: it was available in a sporty-yet-practical version for suburban moms and with performance-oriented packages for young boomers looking to buy their first new car.

Other manufacturers got in on the act, too. Chevy touted style, color and roominess, while Chrysler went whole hog to produce pink and white models intended solely for female drivers. For a while they, too, produced matching accessories for their cars: umbrellas, raincoats and handbags.

Despite the full-on advertising press, most families continued to own just one car. By 1960 the car companies had made some strides, but only 21 percent of households had more than car.

What’s On Tonight?
In 1945, fewer than 10,000 U.S. families owned a TV. By 1960 that number had jumped to 52 million, yet most boomers recall that their families had only one TV. It sat in the living or family room, and the head of the household got to choose what the family watched. With the possible exception of Saturday morning cartoons, the family watched TV together. Before the widespread use of the TV remote, it was often the boomer child who would change the channel when directed, by getting up off the floor and turning the dial on the TV set. It was often the boomer child who got to take the orders for adjusting the TV antenna as well, turning it left, right, up and down in an effort to clear up the snow or flipping picture. By 1970 only 35 percent of households owned more than one TV set. That number jumped to 88 percent by the year 2000. 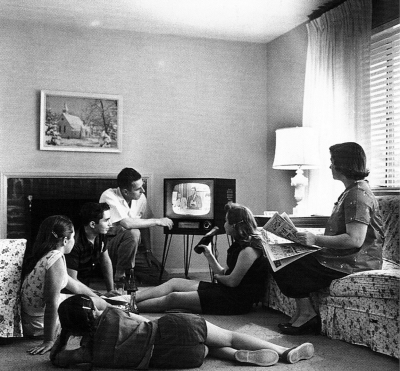 Dinner Time
In most boomer homes, dinner time was directly related to the time when the head of the household got home from work. Mom would prepare the meal, timed just right so her husband could freshen up, maybe take a quick gander at the newspaper and have a drink or two before sitting down at the dinner table. It was required that all members of a family sit at the dinner table for the evening repast. Boomer children did not have a laundry list of after-school programs that might cut into the dinner hour, despite the occasional grumble about meeting a friend for a party or movie. Boomers had to sit with the family at the dinner table. In many households, dinner time was also a time when the TV was off. Since it was often in another room that had no sight lines from the dining room, having it on was tantamount to radio anyway.

Mister B’s family fit into all three of these categories. The family never had more than one car until Brother Boomer got his first car at age 16. His mother didn’t have her own car until she got Mister Boomer’s hand-me-down when he bought his second car while in college.

There was always only one TV, and it sat in the living room. It was a black-and-white set until the mid-’70s. the thought never occurred to any of us that someday each child might have a TV of their own in their bedrooms.

Dinner time was also a singular family affair. If it was summer, Mister B’s mom would call her children from the front porch when dinner was ready. Naturally we’d run home immediately and wash up for dinner. The fracturing of dinner times began a little earlier for Mister B than in some boomer households when his mother went back to work in the late 1960s. At that point the family still ate together whenever possible — especially on Sundays — but not always during the week.

The thought that prevails in the 21st century appears to be that one is never enough. For most of us growing up in the 1950s and ’60s, the thought never occurred to us that families might have more than one car, more than one TV, or more than one dinner time.

Was it “all for one and one for all” in your house, boomers?